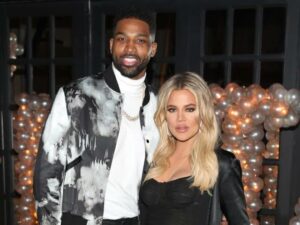 The popular TV personality and model, Khloé Kardashian opened up about her former boyfriend, Tristan Thompson. She has claimed that the NBA star has tried to copy up her vibes and she also noticed that Thompson, 30 has been using her interior design techniques for designing his own home. Hence, it keeps a confirmed idea that Tristan knows well how to flatter and convenience the model.

While the Kardashian and the Jenner girls were sitting together in an episode of KUWTK, the model, 37 spoke, “Speaking of creativity, clearly, Tristan is not.” However, this scene is being deleted but yet it was released by E!

On Wednesday, Khole, further noted, “We do this in our family with all of us. If I’m like, ‘Oh, you have this pillow?’ I’m not going to tell you, but I’m going to get, like, 10 of these pillows and have them all around my house.”

The Tv star has claimed that she came to know Tristan doing this while she noticed the outdoor decor style of the Star. Khole Kardashian simply noted that Thompson has mimicked her decor. Further, she questions Kim, “You know how outside I had, like, these twinkle lights outside over, like, the trellis?. He did that. Like, it’s fine. He’ll just copy so many things that I do.”

Kim Kardashian, also noted that this is not a big issue as the NBA star wants the model to feel like her own home, every time she visits him. The Skims founder cleverly answered, “That means he likes your style and he wants it to be comfortable.”

Further, Kanye’s ex-spouse, Kim noted, “Maybe even, like, when you move and you need a place to stay, instead of renting, you can feel comfortable in his place because it has all your vibes. You’ve got to look at the positive. Have to be positive. It’s not negative.”

In fact, things seem to be changing between them and the model is hence once again ready to give it a try and make it work with him. Thus, in order to grab the once more chance the NBA star has also stepped ahead to once again make apologies to Khloe and get her trust back.

One of the Insiders has said, “This may not be the most ideal situation given Khloé’s trust issues. But the couple is at a point where she’s desperate to make it work and he’s once again promised to do better.”

Earlier this month, Tristan via his Instagram handle has shared a post along with the caption, “Some people will judge you for changing. Some people will celebrate you for growing. Choose your circle wisely.”

Notably, Thompson is being constantly expressing his love and affection towards the model as he is the father to her daughter and also he pleads to her for the acts of deceiving he did.  Khloe has kept no such secrets rather than expanding her lovely family and a Source claims that Khloé wants Tristan Thomspon in True’s life and she is still holding on to the hope for her second kid. They are far from over.

The sources have clarified, “He also promised Khloé that things will be different this time around and that he signed with the Sacramento Kings to be closer to her and True, and be a proper family and she believes him.” Thus, this is clear that the NBA star has once again tried his best to promise Khloe that he would be maintaining the dignity of their relationship.”

However, recently, Khloe Kardashian and her ex-boyfriend, Tristian separated and thus were in the media headlines but Khloe predicted to be happy with her little daughter, True Thompson, 4, following her split.

The model made all realize that she is fixing herself to be focusing on her daughter’s upbringing. Khloe Kardashian, 36, has decided that she won’t be back with Thompson, 30, and is fine with being single. However, the exes are on the good terms are maintaining their harmonious bond yet.

However, after their official split, the model shared a cryptic note, via her Instagram profile.

Khloe posted a message noted on a pink-colored letterboard. This message basically mentioned, “I whisper WTF to myself at least 20 times a day.” Although, the TV star, later on after 24 hours removed this post from her Instagram story.

In June, this on and off couple was seen with their little three-year-old kid, True. True Thompson along with her parents was on lunch at Porto Bella restaurant in Calabasas, California.

While speaking to the media, an insider told, “Tristan is doing well. He has nothing but love for his daughter, (3-year-old True), and nothing but love and respect for Khloe. They co-parent well together. He’d do anything for his baby girl.”

In April 2020, the TV personality Sydney Chase accused Thompson of cheating on Khloe Kardashian and also stated that the NBA star enthusiastically refused to accept this instance.

In 2016, Khloe and Thompson started to date, and soon in 2018, they welcomed their daughter, True Thompson. However, later Tristan was caught cheating on Kardashian with multiple women, and notably, Khole and Thompson were yet together amid the scandal.

Later, in 2019 the player was caught kissing the former friend of Kylie Jenner, Jordyn Woods. In fact, these critics later lead Jenner to break her long-term friendship with Jordyn Woods, as the media reports suggest.

In June, the media confirmed that Khloe and Thompson ended their relationship nearly one year after their reunion. That time, an Insider noted, “They broke up a few weeks ago. They remain amicable toward each other and will continue to co-parent [True].”

The Insider added and clarified, “There was no drama that led to the split, insisting, things just didn’t work out.”

While sitting for an Interview, with Leomie Anderson on the podcast of the show, ‘Role Model,’ and she discussed that how tough it is to raise a black child in America. Khloe, thus, said, “I will be always learning and trying to do the best I can do as being her mom, but I’m obviously not a woman of color.

Iggy Azalea reacts to her dating rumors with Tristan Thompson!
Britney Spears Under Investigation for striking an Employee!
Comment